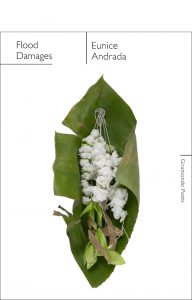 Flood Damages (Giramondo, 2018), Eunice Andrada’s debut poetry book, reads as a series of invocations — to the dark, to lost waters, to endings, to catastrophes, to dance. Split into a trifecta of sections, Andrada’s sole voice — the voice of longing — links them together. There are (in)articulated losses at play in this book, whether that’s the loss of a home, and longing for a homeland, or the loss of an innocence, a love, a language.

Andrada comments forcefully on the many-pronged complexities of sexuality, and the manipulations that arise from painful sexual encounters: ‘the search engine will tell you/ this abuse is a fetish/ candy/ to the ones who can orgasm/ to the sight of you choking’ (52). The monstrosity of sexual abuse and its normalisation is repeatedly evoked throughout the book, its images floating up like carcasses in the sea. It is a comment, too, on the loneliness of sexuality: that these questions are looked up on the internet, and the vociferous brutality with which the internet both swallows and regurgitates this knowledge.

Water surfaces repeatedly in the text: it is an image of intimacy, of pain, of separation. Andrada writes that, ‘a Black Sea leads to your womb,’ where the water is both water of the sea and water of childbirth, a nourishing water. Water is also a motif of comfort, when ‘she hears the ocean through the windows./ Later, two children by the water/ in Puerto Azul. Blue Harbour.’ Watery cartographies resound, like a conchshell, within the ear; the memories of waterfronts and their names become solace. ‘Later’ could mean both earlier and later; the tide of memory isn’t linear. Watery cartographies are plotted in other ways, linking back to ancestry: ‘the name/ for the people she had come from translates to where/ the water flows down’. This downward trajectory, down towards the water, down through the water, carries her and her mother back to their origin, closing the circle of rebirth and remembrance. Water also appears as a form of catastrophe, an ecological disaster. In ‘last days of rain’, Andrada writes, ‘stormwater-blessed children/baptised in ruptured sky/ ripped from the throat of a typhoon/ before it could swallow them’. The ‘blessings’ of the children are also ironically held on the fine point of a curse, as the typhoon comes close to destroying them. The Catholic image of the baptism is also complicated by the impending disaster; the sky itself is broken, ominously holding the children too close to danger.

Images of the sacred are also central to the collection. Praying becomes both escape and habit, as ‘if varicose veined praise the earthworms/ if thirsty rehearse Maya’s second memoir’. The narrative of prayer is intertwined into the soil, ‘sundried’, and sealed into ‘jars of oil on the ground’, its presence everywhere, seeped into the book even in the titles: ‘novena for fidelity’ and ‘novena for my mother’s collarbones’. Spiritual grace and religious rituals thread throughout the collection, pausing in ‘second coming’ as a return to the island home, the origin land. Later, prayer is desperate, pleading for an exit: ‘My god, must I lose/ myself in this chalice?’ The trauma of sexual abuse underscores these prayers, reaching towards a release from damage.

Damage appears, too, in the form of fault lines that rupture Flood Damages. The title speaks to ecological disaster, and Andrada is interested in the impacts of climate change, writing, ‘I am above water, holding/ onto a country that drowns/ with or without me’. It is a ticking clock for the many lands under ecological duress, crossed over with the wounds of colonial violence: ‘Ma says the word ‘tsunami’/ her mongrel tongue/ birthing the word/ in a new body’. The ‘mongrel tongue’ is decimated by the implications of colonial violence for language to be perceived as scarred, and yet pronouncing the leftovers of colonial ecological disaster.

By placing displacement, trauma and language at the centre of her work, Flood Damages interrogates the intersections between body, nation, and the nonhuman. Through these watery geographies, Andrada’s charged poetics allows us to traverse these irrigated fields of prayer and longing.

Pratyusha is an Indo-Swiss student currently working on her MA in London. Her pamphlet Night Waters was published by Zarf Poetry in 2018.