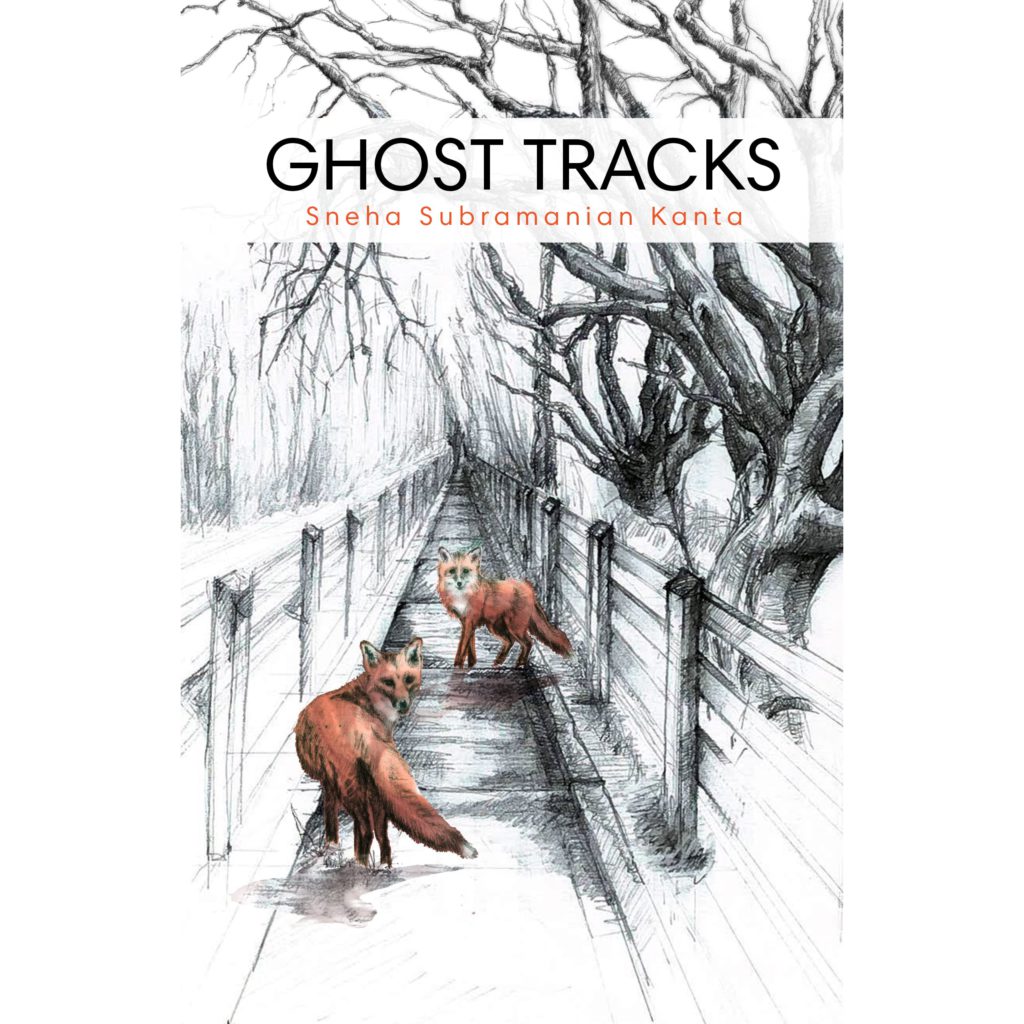 In Western popular culture – be it literature, painting, or film – ghosts are often portrayed in the singular, as the spectral manifestation of those individuals stuck in-between the living world and whatever lies beyond. Those who have been to that beyond and returned to this one, often to impart a new-found wisdom. In Sneha Subramanian Kanta’s pamphlet Ghost Tracks however, ghosts are presented almost exclusively in the plural; as a collective. A central poem, ‘Ghosts in Empty Houses’ begins:

Ghosts remove fishhooks from animal bodies
in the desolation outside an empty house.

on tree barks. Ghosts gift these bodies
to trees & witness them sing at night

This plurality drives a sense of strength and power in their presence. Kanta’s use of a matter-of-fact, declarative syntax, as well as the omission of an article, adds to this. The style is maintained throughout the poems in this book of haunted landscapes, from which non-human bodies have been all but wiped out.

As in the example above, Kanta’s ghosts have something to say, but it is their actions that do the talking. It is through their quiet presence, their simple doing, that these ghosts speak of the horrors and violence of ecological destruction. In the chapter on ghosts in Animal, Dorothea Lasky writes about the bidirectionality of art objects; the idea that texts look back on the viewers. This is why portraits or other works were, at some points in history, covered with sheets or other opaque materials when not being looked at. Kanta removes the opaque material and gives her ghostly subjects a view on the human activity that is responsible for the myriad environmental catastrophes we see both presently and looking forward. The witnessing articulated in the example above runs through the poems. Later on, in ‘Oracle’, ghosts with ‘periscope eyes’ have been ‘sent to earth in another form’. They have returned from wherever it is they’ve been to look upon the world we have created, are creating, will continue to create and it is through their looking that we see, too.

The physical world of Ghost Tracks is both beautiful and dire; vital; deathly. The book’s first line strikes an image of life: ‘The birds have flown south. Gardenias blooming in the sky.’ But the very next complicates things: ‘The city roars in my palm with its leafless branches//Wounds stitched into the synapses of our mouth/the camouflage of hunger as an outsourced emptiness.’ Where a dearth of leaves might simply signal winter, the book’s more troubling themes are foretold in the connotations of ‘wounds’, ‘stitched’, ‘camouflage’ and ‘hunger’. Devoid of any contemporary technologies or material, the few human structures that are featured would be at home in a pastoral poem – a ‘woodhouse in the prairie’; barns; porches – and more than that, they are mostly abandoned. The ghosts see no human presence in this world.

Or maybe it is more accurate to say they see no humanity. A lack of presence doesn’t mean humans have not made their mark. As with the fishhooks, traces of human activities are very much evident. Kanta writes, in ‘Everywhere, Ghosts–’: ‘Say the prospect of violence/remains unseen though the act takes place’. I understand this as an interpretation of the way that environmental destruction occurs in ways that are often hidden from, and often by, the perpetrators. One could understand perpetrators to be bodies in the West with the highest levels of consumption, where the effects of this consumption is felt by bodies in the global South. We could also understand perpetrators to be those corporations which would, for example, dump toxic waste in a river so far from their headquarters or customer base that with enough marketing energy, spin and lies, the reality has no effect on their ability to operate and turn a profit whatsoever. The effect is on the ecosystems of the river and those who would make a livelihood by it. And the ghosts in Kanta’s poetry have come to tell us of their story.

It is in this way that Kanta’s ghosts diverge again from popular artistic representations. ‘Bless their mercies’, it is written. In their acts of witnessing they do us an undeserving generosity (Lasky writes, ‘all spirits in the spirit world are generous, when you meet them in the space of the Imagination within a poem’). Their actions also move the poetry towards moments which use religious parlance and symbols to further complicate their presence, a celestial vitality amongst the devastation. Take this, from ‘Mythmaking’:

Ghosts worship the holy grail
of severed heads in a dried

river with water hyacinths before
they kneel to call out a force.
[…]
Ghosts bless the assemblage

of bones over dry grass. For every body
without an urn to places its remains

Although the ghosts’ actions (‘worship’, ‘bless’) reach towards the heavens, the poetry remains firmly placed on a material, sublunary plane. It is as though a religious lexicon walks the structure of a pagan grammar.

In-between states emerge in other ways in the sequence. Some instances depict ghosts as embodied, having mass, voice. In ‘Among burials, the bracken yields’, they walk, their ‘open mouths’ ‘hymn hallowed choruses’; but they also ‘float’; they are found ‘defying gravity’. In ‘Transmigration’, ghosts are suspended ‘between silence/and static.’ The spectral quality of static extends to the multiple occurrences of particulate matter in many other poems too, whether as ‘dust’, ‘mist’, ‘fragments’, or ‘solvent’: states between intact entirety and partial fracture. Where it might be tempting to see an in-between state as a fixed one, I would say these ideas speak more to ambivalence as ‘two-strengths’ rather than ‘uncertainty’; a strength in plurality rather than a flaw in being caught between. Nowhere is this clearer than the trees in the long poem ‘Illumination Order for Species Hunting’. In this piece, deciduous forests, grasses, cedar, zephyranthes, bluebell woods, birches, spruce, banyan, cacti, elms, myrtle, forsythia, pomegranate and other arboreal phenomena all make appearances, at once criss-crossing and unifying biospheres and latitudes. Kanta writes:

A sirocco can refer to a warm or hot wind, but also denotes specifically a wind that originates in the Sahara and travels to the shores of North Africa and then across the sea to Europe. Like the wind, Kanta’s ghosts ‘mitigate’ borders and boundaries, in this case a particularly fraught set, given the increasingly militarised and punitive reception refugees face when making that particular journey. Elsewhere, ghosts ‘scale brute topography/until the end of a day’. Kanta instructs us to ‘call them cartographers’. As with the floral variegation in ‘Illumination Order’ which crosses notions of country and continent, difference and plurality is acknowledged; but the violent potential of, for example, nationalism and borders is not presented here as inherent or inevitable. The ability of Kanta’s ghosts to transcend existing boundaries in their anti-gravity and spectrality again suggests a benevolence on their part: they see alternative ways of being, and it is through their seeing that we are encouraged to see too.

It is important to say that these poems recognise ghosts as work of the imagination. Put in a better way (reprising the famous Marianne Moore line), Kanta’s book presents imaginary landscapes with real ghosts in them. To revisit that second line in the entire sequence: ‘The city roars in my palm with its leafless branches.’ Instances of the first person pronoun are few and far-between, but in this early image, Kanta establishes the author-speaker’s poise towards the poetry that follows. In other places, Kanta’s ghosts travel in ‘tercets’, they are ‘clad/in violet aubades of lyric’, they walk through the ‘open field’ of landscape, but also of poetry. These images tell us the poetry is made by this material world, and simultaneously makes it. It says that after all, it is not the ghosts that are responsible for witnessing: it is poetry ; language.

Cai Draper (@DraperCai) is a writer from South London living in Norwich. His work is published in various places, with pamphlets forthcoming from OrangeApple Press, Broken Sleep & elsewhere. www.caidraper.com